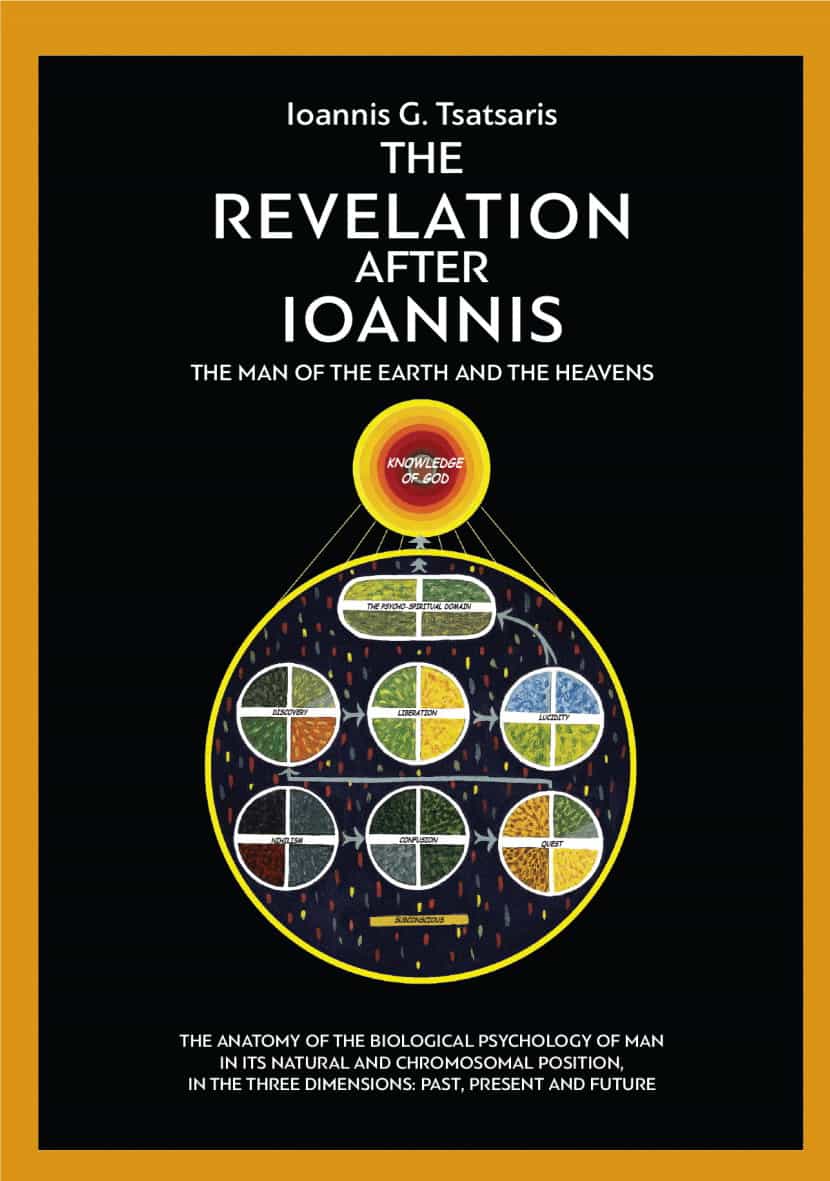 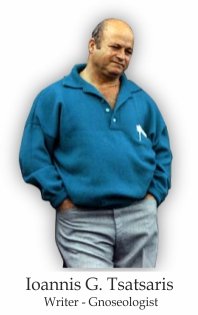 The book by Ioannis G. Tsatsaris “The Revelation after Ioannis” was first published in Greek in 1997 and is currently at its third edition. The enormous success of this book led to its translation into English which was released by Epistos Publications in 2000.

INTRODUCTION TO THE INNER BOOK

As I begin putting this book into writing, my Position of knowledge summons me to begin at the creation of the entity Man. According to what has been written up to the present, none of those seeking to fully understand his mysterious inner-emotive Position have received the grace to fathom the biological composition of his organic Order and gain access to the motivating forces of his possessive impulses in their bio-kinetic state, which emerges as emotive desire and gives expression to his Position.

The true essence of the bio-energetic state of his emotions remains shrouded in mystery. It has become evident that those who have tried – and are still trying – to do this, have not reached the state of magnetic perceptive awareness that will provide entrance into the animate domain of this entire organic system in its individual molecular state and its central glandular structure. Thus I enter inductively into the Position Man, as formed, which functions within most everyday experience on two communicational planes: the expressive outer plane and the inner emotive one.

The principal aim of the latter is to hide deficiencies, but it is unable to rid itself of them. Then these deficiencies, entangled in psychological complexes, create internal pressure on the individual, who is obliged to have recourse to his outer expressivity in order to hide his own unhealthy pathology. He does this mainly by fabricating fictitious thoughts and events, and setting himself up as a hero somewhere within them. In this way he charts a two-fold course, which leads him unimpeded along the functional course of his life. And because of this, I, in my awareness of these creations, am here to depict in writing this cosmogonic principle through the revelation of the biosynthetic composition of the individual in its three hypostases: Body, Soul and Spirit, as they appear, according to the strictest of absolute principles.

These hypostases or planes of substantive existence have been positioned in such a way within the preordained Order by the Law of Creation of the planet Earth, and also of other planets belonging to the Intermediate Universe, that each of these hypostases exists within the dimension of its own individuality, but is also completely dependent upon the others. This is why the Law of Creation ordained that they co-exist one inside the other, and that biologically the Position of each be recognized as a Nucleus for the presence of the other two Positions in their nominal ordinations Body, Soul and Spirit. But always on condition that they achieve unification hierarchically toward the formation of the integrated individuality as an evolving Element in the Intermediate Universe.

And, as the Intermediate Universe is pervaded by a great amount of Anti-Lawfulness (negativity), the powers that be, the great Fathers of Eternal Light who hold authority to order and reorder the Universes, receive an encoded command from the inner Order of the Universal Creator to send a special Position (emissary), who will always be under their surveillance, and they will progressively and biologically transform and re-order his perceptions regarding the natural composition of the atmosphere of the planet to which he has been sent. For it is a strict Rule applying to every planetary biology, that each planetÀs biological functions are distinct and autonomous. And so if the emissary sent by the divine Orders does not receive the guidance and Offers of the Fathers of Light in his biological state, he can not possibly enter into the hypersonic and subsonic states that will lead him into a special heightened awareness of the meaning of the nature of the planet he has entered, exactly as determined by the Law of Human Life.

During such times they also send certain other luminous Souls who belong to the Psycho-Spiritual Universe. These other Positions (Souls) are sent to carry out individual missionary work, which implies the evolution of their Position to a higher level, but they have also been empowered, because of their individual mission, to produce the required positive energy necessary to keep the balance of the planet in check. They will have strong peripheral protection and the Archangelical Orders will relay messages to them so they can form an idea of what they must seek out.

Extreme care must also be taken so that the messages are received in their entire interpretation, and it will be their particular concern to seek out, mentally, the specially sent Position mentioned above and join themselves to its Nucleus, so as to be able to bring their mission to completion. Because on their own they are completely powerless to carry out the work preordained for them, as the Negative Order has a way of entrapping them… Only he who was sent by the Pan-nuclear Universal Authority, center of all authority, was biologically endowed so that he could know how the Negative functions. A Rule (…) has also appointed me, in my animate presence, to be in charge of this work, which I bring to light and which is being performed for the first time in the vast annals of life on the planet Earth.

And as I feel responsible in my state of heightened consciousness, I am writing this book for you, in which the greatest revelation made concerns first my immediate communications with Positions and Super-positions of the Universe, which I feel the need to present to you, since I also function biologically here on Earth, and then the exposition and analysis of the Bio-Psycho-Spiritual wholeness of the individuals on Earth, as much as is permitted me by my personal Rule and the level of biological perception of human societies on this planet. I begin with the analysis of Body, Soul and Spirit as positions pre-ordained by the Laws of Nature and Creation in their presence here on Earth. Only for the one who is inducted into these noetic states of awareness will the gates of the Heavens of light open in warm embrace…

My powers of perception do not allow me to be so ambitious as to call myself the One whom every reader has been waiting to hear; they permit me only to say that my name is Ioannis G. Tsatsaris. This book was written from the inner call of my own elemental Being to present to the peoples of Earth my perceptions and observations concerning the functioning of society and its members, who are all seeking solutions. And even though at the beginning they feel satisfied with the new discoveries of their thinking, they eventually find themselves in a vast wilderness.

This is why, beginning at the micro-molecular level, I reveal concisely the way this functions up until its complete integrated configuration, which is Man in his entirety. In this writing you will find words that denote important and special meanings that cannot be properly expressed by any modern language and its syntax today; and this is because the learned among us have not as yet focused on these concepts in their attempts to comprehend the mysteries of Man’s organic functioning. Since the concepts expressed in these revelations have not appeared before in exactly the same way to human consciousness, I restrain myself from giving a broader, more complete analysis of the.

These ideas have extremely powerful core Positions, but because of the emotive states that have entered Man’s viscera from the Position of the Unconscious, certain people will be unable to perceive them as a gift from on high. Instead, there is danger that they will be drawn by these concepts into illusory states entangling them in unrealistic suppositions, which is always a trap for Man. Following my own inner calling I have used the language of Higher Sensory Attunement to reveal how Man can create his own inner harmony.

In this book you will find much newly revealed insight, and be encouraged to examine the thinking that is deeply entrenched in you, by standing outside of it aw observer. From that vantage point you will be able to pinpoint many areas of perceptive awareness, where you have gone imperceptibly wrong, impelled by the hurriedly drawn conclusions, that have taken over unawares certain parts of your emotional terrain. From this book you will acquire the knowledge to formulate new ways of perceptive awareness, enabling you to see the open gates of the Heavens waiting for you as a Rule of Life.

The Next Step of Creation. The Revelation
Scroll to top

Because these cookies are strictly necessary to deliver the website, refusing them will have impact how our site functions. You always can block or delete cookies by changing your browser settings and force blocking all cookies on this website. But this will always prompt you to accept/refuse cookies when revisiting our site.